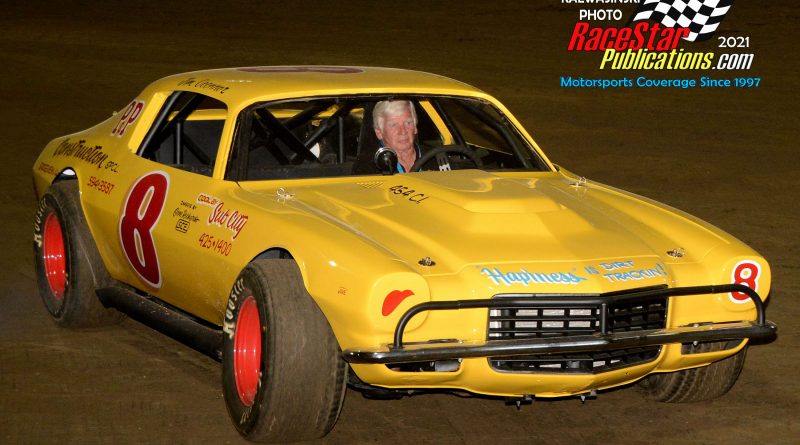 Chicago, Ill.,--It’s September 1, most kids are back in school and the racing season in these parts is winding down.

Grundy County Speedway in Morris, Ill., has a busy schedule this coming Labor Day weekend.  A full program of stock car racing is on tap for this Friday with the annual Night of Features, highlighted by the 61-lap Lee Schuler Memorial, planned for Sunday evening, September 5.

The Night of Features usually closes out the points races in the various divisions that see action during the weekly Friday night programs at the third-mile, paved oval.  Veteran speedster Eddie Hoffman is leading the late model standings and is seeking his seventh late model championship.  Seven titles would surpass Hoffman’s dad, Ed’s six championships, the first coming when the speedway first opened in 1971.

The annual Mazon Speed Bowl/Grundy County Speedway Hall of Fame induction ceremony will take place this Saturday.  The event, again featuring a display of over 4,000 photographs from both Mazon and Grundy, begins at 12:00 Noon with the inductions taking place at 3:00 pm.  Inductees for both 2020 and 2021 will be honored.

Over at the Rockford Speedway, Jon Reynolds Jr. leads Jerry Gille by a mere eight points with two more weekly NASCAR late model shows to go – September 4 and September 11.   Reynolds is the defending late model titlist at the quarter-mile, paved oval, having won his first title in 2014.  Gille is a three-time Rockford champion, winning the last time in 2012.

Rockford will host its 56th annual National Short Track Championships weekend October 1st through October 3.  The event will be highlighted on Sunday afternoon by the late model headliner which this year will feature Big 8 Series late models.

Former Grundy late model champ Billy Knippenberg leads Chase Osterhoff at the Kankakee County Speedway in the Pro Late Models points standings.  The track’s shows three more dates on its 2021 schedule including September 3, 17 and 24.  Knippenberg, a two-time late model titlist at Grundy, got his start on dirt at Santa Fe Speedway as he followed his dad, Bill’s footsteps on the clay.  Nick Clubb leads the track’s modified standings.

Sycamore Speedway’s schedule calls for racing every Friday and Saturday night through the month of September.  Greg Cantrell Jr. and Jeremy Spoonmore are battling it out for the track’s super late model crown.  Cantrell won the championships in both 2020 and 2019 with Spoonmore grabbing the title in 2018.  The Badger midgets are at Sycamore this Saturday.

Shadyhill Speedway in Medaryville, Ind., also has a full schedule of Saturday night racing through September.  The fifth annual Mystery 100 for modifieds is slated for September 25.  Last year’s event paid $8,000 to the winner.  What will first place pay this year?  The Badger Midget Series will visit Shadyhill for the first time on September 18.  Brad DeYoung looks to have a firm grip on the modified points standings as he rolls toward his third career modified track championship.

It’s good to hear that Boris Jurkovic is on the mend after being involved in a bad crash at Michigan’s Berlin Raceway back in May.  After spinning during the late model feature, Jurkovic was hit head on by another car with Jurkovic suffering severe knee injuries which would require four days in the hospital and months of recuperation at his Florida home.  Jurkovic, who was dominant in late model racing at Berlin in 2019, was recently on hand at Berlin to watch his nephew, Eric White compete.

Jurkovic started late model racing in 1996 and won the late model championship at Illiana Motor Speedway in Schererville, Ind., in 2002.  He captured Illiana’s Tony Bettenhausen 100 twice before the track was shuttered after the 2015 racing season.  Jurkovic also won the Winchester 400 late model special in 2011 in addition to a 200 lapper that was part of the All American 400 at the fairgrounds oval in Nashville, Tenn., in 2006.

It’s still hard to believe that Wayne Adams passed away this past May 27.  Sure, he was 102 years old but he was part of the Chicago area racing scene for over 50 years, getting involved in racing in the 1930s.  Adams was the track announcer at Blue Island’s Raceway Park from 1947 through 1989.  I’d be lying if I told you that I didn’t try to imitate him during my announcing days at Grundy and Illiana.  Again, Rest in Peace, Wayne.

Promoting the Illinois Stock Car Hall of Fame, Art “Fireball” Fehrman and Jerry Clark have been having fun taking the totally-rebuilt  Jim O’Connor Camaro No. 8 to different Midwest race tracks this summer.  O’Connor used this car to capture the late model crown at Chicagoland’s Santa Fe Speedway in 1974.  A product of the Kankakee area, O’Connor was totally surprised when the refurbished piece was unveiled for the first time earlier this summer.

“Back in the Day” – Looking back at area racing 10 years ago in 2011, Eddie Hoffman and Nick Allen were big winners on the local scene.  Hoffman won a total of 16 main events during the year and was crowned the late model champion at the Grundy County Speedway.  Allen won UMP modified championships at both Shadyhill Speedway and at Kankakee County Speedway.

Mike Provenzano was the late model champ at both the Kankakee fairgrounds oval and at LaSalle Speedway.  Johnny Heath claimed his fifth super late model crown at Sycamore Speedway.  Mike Kingma was a dominant force in I-Mod stock car competition at both Shadyhill and Kankakee. 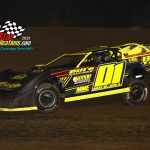 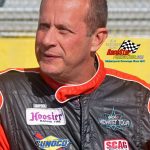 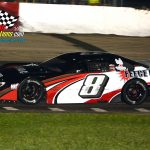 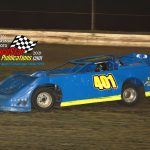 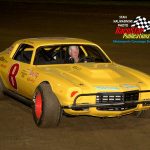 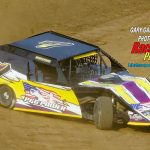 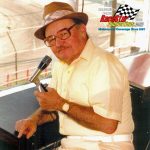