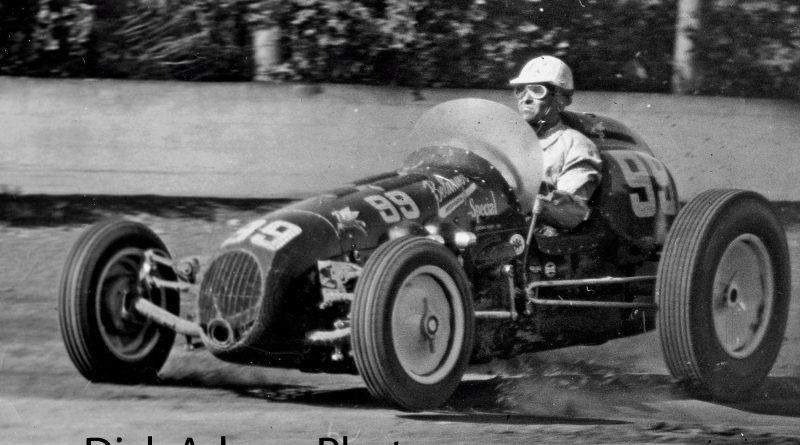 Bettenhausen, who began his speed career racing a midget indoors at Chicago’s 124th Field Artillery Armory during the 1937-38 winter season, enjoyed a stellar auto racing career, including two national Indy Car championships, until that tragic day at the Indianapolis Motor Speedway in May of 1961.

The story goes that Bettenhausen, who along with the rest of the family tended to the family farm after his father died, pedaled his bicycle some 35 miles to Roby Speedway in Hammond, Ind., to see his first auto race in 1935.  After some indoor racing at the Armory, Bettenhausen teamed up with Duke Nalon with the duo traveling out east to compete in midget racing at the fast and sometimes deadly Nutley Velodrome in New Jersey.  Bettenhausen took his first “outdoor” ride in a midget at Nutley in 1938.  He was back at the Armory for the indoor action the following winter.

Bettenhausen began to also race sprint cars or “big cars” as they were known back then in 1940.  In 1941, his ride was the Henry Meyers-owned Iddings Hal out of Dayton, Ohio with Bettenhausen winning his first American Automobile Association (AAA) sprint car feature at Ohio’s high-banked Dayton Speedway on June 22, 1941.

Bettenhausen made his AAA Champ Car debut on the dirt at the “Milwaukee Mile” on August 24, 1941 when he drove Joe Lencki’s Blue Crown Spark Plug Special to a sixth place finish in the 100-mile contest.

1946 saw Bettenhausen make his first of 14 starts in the Indianapolis 500, finishing 20th after starting 26th in the aged Bristow-McManus, Miller-powered, No. 42 entry, completing 47 laps before a connecting rod broke.  Earlier in the month, Bettenhausen had put Carl Marchese’s No. 27 in the field only to have the car withdrawn from the race after a broken crankshaft was found.  Bettenhausen won his first career AAA champ car race at Good Time Park in Goshen, N.Y., on October 6, 1946.

In his second year at Indianapolis (1947), Bettenhausen drove the Murrell Belanger No. 29 entry to an 18th place finish after starting 25th.  A timing gear problem put him out of the race.  He was back in a Belanger car in 1948 and came home in 14th place.   Bettenhausen did not make the field in 1949, being “bumped” during last day of time trials.

Bettenhausen drove a front-wheel-drive, Offy-powered, Diedt chassis car the next three years, finishing 31st in 1950 for car owner Lou Moore.  He finished ninth in 1951 and 24th in 1952.  He drove for J.C. Agajanian in 1953 and finished ninth after starting sixth.  He was behind the wheel of Mel Wiggers’ No. 10 in 1954 and came home 29th after experiencing engine failure.

For the 1951 race, Bettenhausen was under contract to Lou Moore to drive one of Moore’s Diedt cars which were “state of the art” pieces in the late 1940s but were beginning to show their age..  Bettenhausen had driven Murrell Belanger’s lightweight 1949 Kurtis 327 to two wins in 1950 and two more in 1949 when the car was owned by the original builders – Meyer & Drake.  With Bettenhausen in the Moore stable, the ever-proud and somewhat upset Belanger put veteran racer Lee Wallard in his Belanger Motors Special No. 99 for the ’51 race with Wallard winning the 500-miler.

A week or so after his ”500” victory, Wallard was seriously burned in a big car/sprint car accident, which pretty much ended his racing career.  This set the stage for Bettenhausen and Belanger, the Crown Point, Ind., car owner, to get back together.  Bettenhausen, behind the wheel of  Belanger’s dark blue racer, went on to win eight of 15 championship races the rest of the ’51 season – setting a single season record for the most wins which stood until 1964 when A.J. Foyt won 10 races.  With that performance, Tony Bettenhausen was the 1951 AAA National Champion.

A veteran mechanic , the late Ray Nichels reminisced about the Belanger car in 1999, “Meyer & Drake built that little car that (Tony) Bettenhausen started driving.  It had a blown midget engine in it (at first).  You couldn’t keep the engine together, but when they turned around a put a full 270 (Offenhauser) engine it in – school was out.  You couldn’t run with it.”

Bettenhausen wrecked the Belanger No. 99 attempting to qualify for the “500” in 1952.  Escaping serious injury, Bettenhausen bounced off the south wall a reported three times.  A week after the big race, Bettenhausen announced he was retiring from all racing except the “500” – partially influenced by the death of Johnny McDowell at Milwaukee.  He previously announced his retirement from all racing in 1948 exclusively to Chicago area motorsports writer Wayne Adams as he laid in the hospital, recuperating from serious leg burns he suffered when a gas line broke in his midget at DuQuoin, Ill.

Recovered from serious injuries received in a midget crash at Chicago’s Soldier Field in 1954, Bettenhausen turned in his best “500” performance in 1955 when he and co-driver Paul Russo guided H.A. Chapman’s No. 10 to a second place finish with the duo winning $30,089.  Bettenhausen and his old “Chicago Gang” buddy Russo had planned the co-driving before the race with Bettenhausen starting the race in second position.

Bettenhausen joined forces again with Belanger for the 1956 race.  Bettenhausen started fifth in Belanger’s Kurtis roadster only to hit the wall after blowing a tire and breaking a collarbone.  He completed 160 laps and was credited with 22nd in the finishing order.  Bettenhausen was 15th in 1957 behind the wheel of the powerful Novi racer.

Bettenhausen put together two fourth places finishes in both 1958 and 1959 in Quin Epperly-built laydown roadsters.  He crashed hard at Indy in 1959 during practice but came back in another car to qualify for the race.  Although not winning a single race in 1958, Bettenhausen was again the National Champion.  Driving for Lindsey Hopkins in 1960, Bettenhausen finished 23rd in his Dowgard Special No. 2 after dropping out because of a broken connecting rod.

Caring for some 600 acres of corn and soybeans at his farm in Tinley Park, Bettenhausen had talked Hopkins into buying a year-old, Quin Epperly-built laydown roadster for the “500” in 1961.  Autolite would be the sponsor with veteran crew chief Jack Beckley handling the wrenches.  When the speedway opened in early May, Bettenhausen in his Autolite Special No. 5 established himself as a heavy race favorite.  He was fast when things got underway, turning a lap of 149.254 miles per hour on May 10 – the Wednesday before the first weekend of time trials.

On Friday afternoon. May 12, the 44-year-old  Bettenhausen would take a few practice laps in buddy Paul Russo’s car as he attempted to help Russo find some needed speed.  Coming down the main straightaway, just the passed the start/finish line, the car abruptly turned right, crashing and sliding  upside down along the outside  retaining wall 100 yards or so, taking out six sturdy fence posts and being wrapped in protective fencing during its sickening journey.  An anchor bolt holding the front radius rod support fell out causing the car to  turn sharply when the brakes were applied.  A fire broke out but the “Tinley Park Express” was already beyond help.

Looking back at his career, Bettenhausen, whose sons, Gary, Merle and Tony, would follow their Dad’s racing footsteps, had started 118 AAA/USAC championship races, winning 22 of them.  He posted 30 more “top five” finishes and had won 13 pole positions.  Bettenhausen was also a winner in national midget and stock car competition and even competed in the Mexican Road Race twice.  Tony Bettenhausen was a favorite during what many consider a very special era of auto racing. 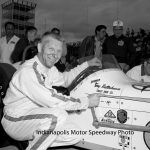 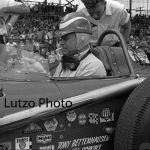 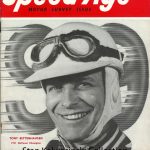 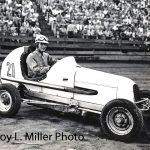 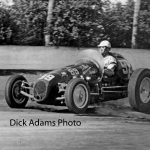 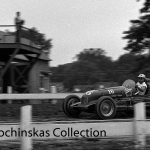