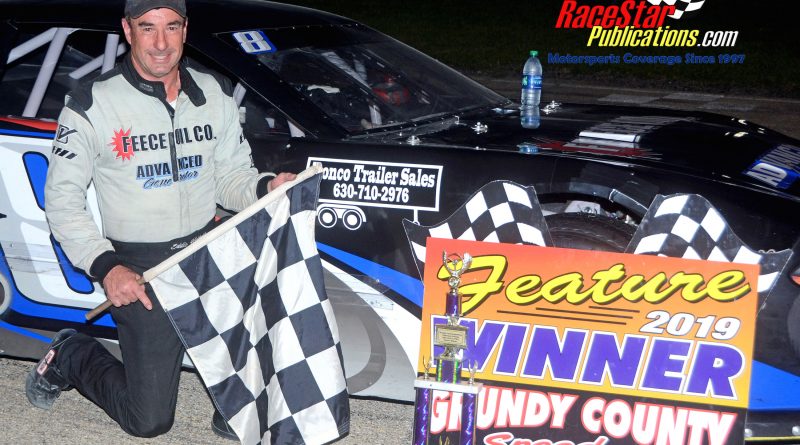 Chicago, Ill.—Grundy County Speedway in Morris, Ill., will finally kick off its stock car racing season this Friday evening, June 26.  The third-of-a-mile paved oval, located at the Grundy County Fairgrounds, will host its 50th year of racing.  With the COVID-19 pandemic still with us, the speedway’s website lists social distancing guidelines for both fans and race teams.

Back on Sunday afternoon, May 30, 1971, the new speedway, which replaced the old Mazon Speed Bowl, opened for the first time with late model and six-cylinder stock cars on the program.  Ray Freeman and his ’69 Camaro won the first late model feature race held on that day while John Snyder won the six-cylinder headliner.  With the exception of some scattered dates on other days of the week over the years, Grundy has seen weekly stock car racing held every Friday night during the summer – thus the nickname, “The Friday Night Racin’ Place.”

This Friday night’s program will see all of the track’s divisions in action, including late models, Mid-American sportsman, street stocks and pure stocks (four-cylinders).  The $1,500-to win Cabin Fever 50 presented by TC’s Liquor for late models will highlight the evening’s competition.

Expected to make another run at a championship, veteran racer Eddie Hoffman racked up his sixth career late model track championship at Grundy last season.  Hoffman is the winningest late model driver in Grundy history with 142 career feature wins and his half-dozen titles now ties his late dad, Ed Hoffman, for the most championships at the speedway.

The speedway has undergone a number of improvements as race director Chuck Yuris pointed out.

“Kerry Carter of the fairboard and general manager Joe DeBello have been working real hard,” said Yuris.  “A lot of new LED lighting has been put up around the track.  12 poles in the infield have 10 brand new LED fixtures on them.  The place is really lit up.  Some adjustments will be needed after opening night and after getting some feedback.

“The main road leading into the track has been repaved as well as a new strip from the scales in the pits to the race track.  All bathrooms have been updated and improved, including the ones in the pits.”   A lot of paint has been used all over, including in the concession area.  New railings and lighting, along with repainted aisle ways, will give fans more comfort in the stands.  The track has a new pit sign-in booth and a lot of new signage has been put up.”

And before you know it, a major stock car special comes to Grundy as the ARCA Midwest Tour will begin its 2020 championship season on Saturday night, July 11, with the 34th running of the Wayne Carter Classic.  A $5,000 winner’s purse has been posted by Rod Baker Ford and Illinois Truck & Equipment for the 100-lap contest which will pay $725 to start the 25-car main event.  No Carter Classic was held in 2019 with Dalton Zehr winning the event in 2018.

“This is where it all began for my parents with ARTGO so it is pretty special that Grundy is the track where the Tour starts up again,” noted Midwest Tour promoter Gregg McKarns, whose parents John and Sue McKarns promoted the ARTGO Challenge Series through 1997.  “The video of their (Grundy’s) new lights is phenomenal.  I can hardly wait to see everyone’s reaction when we roll into Morris.”

Rockford Speedway begins its 73rd season of racing this Saturday.  A full program of stock car racing, highlighted by NASCAR late models, will be on tap at the banked, quarter-mile, paved oval.  Social distancing guidelines will be in place and it's recommended that fans wear masks.  General Manager David Deery says capacity will be limited between 25 and 30 percent, which is somewhere around 1,500 people, and he says he feels comfortable with their safety protocol.

Sycamore Speedway, located west of St. Charles in Maple Park, Ill., will not open until the weekend of July 24th and 25th according to the track’s general manager and promoter, Tiffany Olson.

“We have decided to push forward with our proposed schedule,” said Olson.  “We have not announced any sort of social distancing guidelines as of yet.”

Racing in the State of Indiana for almost a month or so with Plymouth Speedway and South Bend Speedway already getting in several programs.  The Plymouth dirt track saw several events held with no fans on hand as did the South Bend paved oval.  The Amsoil USAC National Sprint Car Series will be at Plymouth this Friday evening.  Daugherty Speedway, another Indiana dirt track, opened on June 14 and has another race program scheduled for July 3. 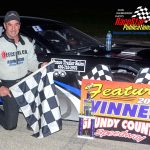