One of the largest UMP Modified payouts early in the 2022 season is at Bloomington Speedway Friday night May 13th.

Just to start the B main pays 150 to all of the Modifieds in attendance.

Roddy was one of the strongest people we know that battled courageously and this show is an awesome memory of that very fast 9H that won a lot of races at the Red Clay with many different drivers.  An awesome list of businesses and people that new Roddy have made a huge donation to each Lap at 100 bucks so 3 grand if a lucky Mod driver would lead lap 1 thru 30.

Hopefully the place is packed full of UMP Mods and a packed house on the hill to celebrate Roddy’s dream of definitely continuing the legendary race in honor of his Dad and him. We would like to thank many people that helped this race have such a huge purse and will feature some of the top talent for sure in the Midwest battling it out for an awesome trophy and memory.

It will be an awesome filled pit area also with Sprints, Super Stocks and Hornets also on the schedule. Roddy Strong Tshirts and Hoodies will also be available with an awesome design with both 9H cars included. Mark it down on your calendar and tell as many racing friends that you have about this very special race with some of the best Talent in the nation and area coming to sling the Red Clay!!!

Thanks again for all the sponsors and all the people that have helped raise the roof on the payout for Roddy’s race. See you May 13th at our favorite high banked red clay speed palace Bloomington Speedway. 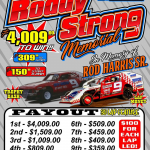